Have you ever wondered why we act the way we do in relationships? Why our partners do?

How some relationships last the long haul and others split after weeks or months?

What are the roots of codependent tendencies? Why do we give up our freedom and control in exchange for safety and submission?

What Kind Of Attachment Do You Have? 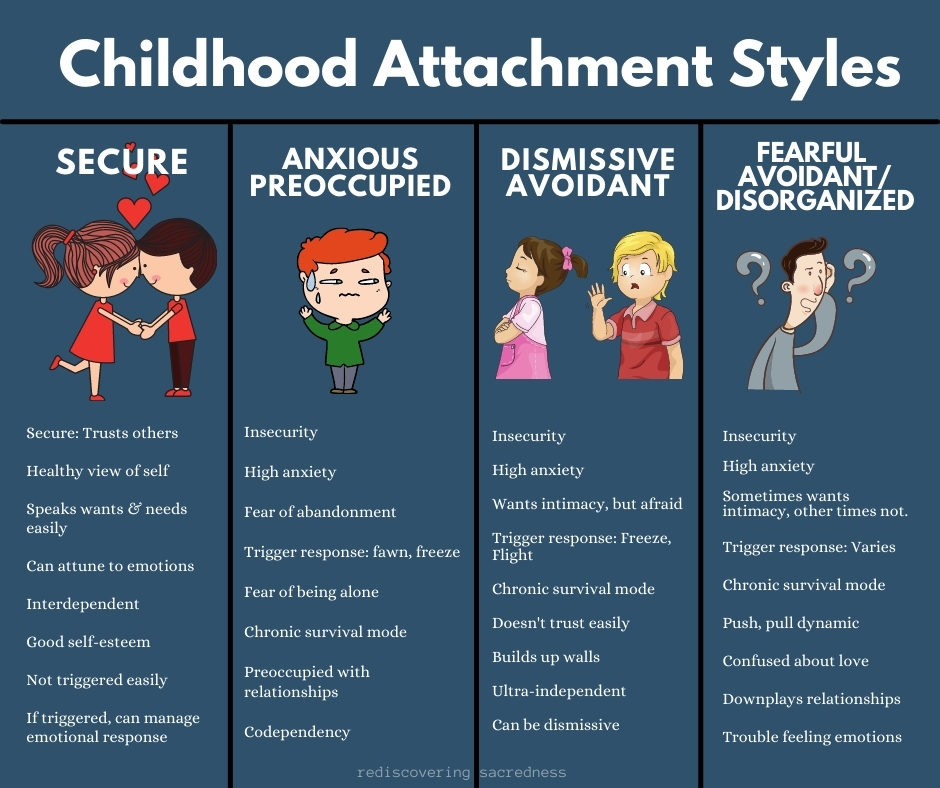 Every relationship is different, but some relationship experts have come up with ways in which people “attach” in a relationship.  It is called the attachment theory.

It was John Bowlby who first began studying attachment theory, defining attachment as a “lasting psychological connectedness between human beings.”  He believed that the attachments formed early in life had a significant impact throughout the rest of life.

If a secure attachment is made early with the primary caregiver, the child will have a better sense of security as they age. If not, an insecurity will most likely develop, and along with that, anxiety.

The following are the 4 Attachment Style categories:

Statistics report that about 60 percent fall into the “Secure” style.

This leaves around 40 percent of the population struggling with an “Insecure” attachment style – and that’s a lot of people!

Journey with me to see where you stand.

Those with an anxious-preoccupied attachment style resemble what many have been labeling “codependent” in the last few decades.  Think of someone who has a lot of anxiety and seems to be “preoccupied” with having a relationship.

These are the those that that formed “insecure” attachments to the primary caregivers due to inconsistency in getting their needs met.

Many emotional needs went unmet due to absence or the caregivers own emotional, mental, or physical distress. It doesn’t mean ALL their needs were unmet.  Research says about 2/3 of their needs may have gone unmet.

Basically, home life was on the dysfunctional side and as a result, an extreme sense of insecurity formed within the child. On the physiological level, this meant that their nervous system was in “survival mode” or “fight, flight, or freeze” mode a lot.

Even homes that may just be slightly dysfunctional can still produce anxious preoccupied attachments.  Maybe Mom suffered from major depression and though she cared for her baby, she just wasn’t able to give the baby her undivided attention. She was living in a depressive state, unable to really give her baby the emotional support needed.

Or perhaps Dad was not expressive of his love, so he never offered tender loving care to the child. He may have engaged with the child some, but not on a deep level, and therefore the child did not really bond with the father.  Insecurity can be formed during childhood for numerous reasons and the level of insecurity depends on many factors. There could have also been abuse, neglect, trauma, illness, etc.

Some might call this group needier, clingy, or codependent.  If you have an anxious preoccupied attachment, you are anxious a good bit of the time- especially when you are not with your partner or alone.  You crave your partner’s presence or someone’s presence, because being alone makes you feel anxious.

Thus, you might get termed “needy”. You get anxious when your partner doesn’t call or text you back immediately, you are very sensitive to your partner’s moods, and you don’t like creating or having to deal with conflict. However, you do create conflict because that tends to gain your partner’s attention. (And, it’s familiar) Experts state that essentially, you are recreating the same childhood trauma, trying to get your unresolved issues resolved.

Those who have a dismissive avoidant attachment grew up in homes where they didn’t feel “safe” either. Or, at the very least, they didn’t know for sure if their needs were going to be met with consistency.

Perhaps their caregiver was mean or abusive or the child would get punished for “relying” on them. This lack of care, abuse, or neglect would cause their nervous system stress overload. Since they couldn’t “fight” or “flight” (run away), they “froze” or “shut down”.  It’s the survival mechanism they had to use to get through whatever was going on.

This causes them to put a wall up and learn not to depend on anyone.

Those with dismissive avoidant attachment styles tend to love their independence. Some are ultra-independent.  They want intimacy, but they are afraid that if they go after it, they will lose their freedom.  And, they tend to only want intimacy to a degree, as they have a tough time being vulnerable.

When their partner wants to get beyond their “wall”, their nervous system freaks out and they don’t know how to deal with the emotions or intense sensations that occur in their body. It’s still the same coping mechanism they learned in childhood, but are not typically aware that this is going on.

People in Avoidant Attachment style tend to feel smothered or apprehensive when a partner wants to get close. They repress their desire for intimacy and keep others at arm’s length. They may get annoyed easily and lack patience when others need something from them, mainly because they figure if they can meet their own needs, everyone else should too.

Now the degree of avoidant behavior can vary greatly. This group may include those who are diagnosed with narcissistic personality disorder, substance abuse disorder, emotional or verbal abusers, and just plain selfish or emotionally unavailable people.

Oddly enough, these are the types of people many  in the Anxious Preoccupied are attracted to, which is really a recipe for disaster unless both are willing to “do their inner healing work”.

Fearful-Avoidant Attachment Style is relating to others in anxious AND avoidant ways. You may also hear it referred to as “disorganized”.

Someone with this style of relating wants relationships, but is also afraid of vulnerability and deep intimacy.

The push and pull.

It’s the most unpredictable attachment style because the person has both avoidant and anxious sides.

One day they are wanting closeness and the next, they could feel like they are being smothered and retreat.

Based on an “insecure attachment” style, they tend to fear quite a bit. Even though they may seem all “cool” on the outside, inside, their nervous system is on high-alert. They tend to think others and life in general is dangerous…or not supportive.

They fear abandonment, intimacy, not being enough, being too much, and more. They take things personally. They’re hyper-independent. They’re aloof. But they’re also needy at times.

As a child, they desired closeness, but also feared it.  Their psyche went into action and helped them cope by this type of “defense mechanism”. Their nervous system tended to be on high alert, hypervigilant not knowing if at any moment, danger was coming.

Those in the secure camp do rather well in relationships. As children, they were able to feel secure that their primary caregiver(s) were dependable and would not abandon them. They suffered less trauma, abuse, neglect.

This helped them to feel more secure throughout life, as their nervous system was more regulated.

Those with secure attachments tend to be good communicators, feeling freedom to share their wants and needs.  When conflict arises, they don’t tend to fly off the handle or operate from a wounded place. When triggered, they tend to have more internal resources to work things out in an emotionally mature manner.

They’re more comfortable with intimacy. They view the relationship as more of a team, and invest in it regularly. They are more secure in themselves and this helps tremendously in a relationship.

It would be nice if everyone fell into the secure attachment group, but that is not the case.

Good news is that you can shift your attachment style if you invest in growing, learning, and changing. It will take some work, but you can do it.  Both anxious and avoidant attachment camps ought to be trying to become more secure.

Invest some time learning more about attachment styles and relationship dynamics. If you experienced trauma as a child, consider reaching out to a trauma therapist or Somatic Experiencing therapist.

I’ll be posting many more articles as offshoots of this topic here soon.

Purchase some books on relationships and educate yourself. If you fall into the Anxious Attachment group, you’ll want to read up on codependency to try to change some of your thoughts and behaviors.  There are also many valuable books out there by experts in the field.

As you invest in personal and spiritual growth, a better relationship will be a byproduct. As you journey toward becoming more secure in yourself and God, all of your relationships will improve.  There are so many people who have relationship problems their whole lives, but never make effort to get to the ROOT of the matter.

For insecure attachment styles, I personally suggest finding a good trauma therapist who will work with you at the mind, body, and spiritual level.

It’s quite likely your nervous system has been operating primarily in “survival mode” since childhood, which would explain the great amounts of anxiety you feel.

·         What characteristics of that attachment style stick out to you the most?

·         Do you think you can progress toward a secure attachment?

Dominica Applegate is an author, writer, and transpersonal spiritual teacher. Her teachings have helped millions of people experience emotional healing, relationship repair, and spiritual awakening. Earning her BA in Psychology and MA in Counseling, she worked 12 years in the mental health field before diving full-time into writing.

Ready To Journey Within?

Hello there. I’m Dominica, founder of RS and honored to be among a passionate team dedicated to helping those that are tired of struggling with inner pain. Those that feel alone. Confused. Frustrated with life.

We are on a mission to help bridge the gap between emotional pain and authentic, real-deal joy. Turning pain into purpose.